This article discusses Swami Vivekananda’s power of eloquence and his ideas on public speaking.

Swami Vivekananda’s very first address at the Chicago Parliament of Religions established his stature as speaker par excellence. The American poetess Harriet Monroe offers one of the sharpest picture-sketches of his performance before that huge audience:

“Others (delegates)… spoke well…. But the handsome monk in the orange robe gave us in perfect English a masterpiece. His personality, dominant, magnetic, his voice rich as a bronze bell; the controlled fervour of his feeling; the beauty of his message to the Western world he was facing for the first time — these combined to give us a rare and perfect moment of supreme emotion. It was human eloquence at its highest pitch.”1

The comment, “human eloquence at its highest pitch” is worth some contemplation. Appropriate language, use of literary techniques such as simile, analogy, anecdote —these are among the qualities displayed by great speakers in history. But the expression, “human eloquence at its highest pitch” should suggest something that surpasses all other features of oratory: prophetic tone and voice. ‘Oratory’ sounds somewhat trite and banal when used with reference to a spiritual teacher like Swami Vivekananda.

Anyone who reads — even superficially — the life of this principal disciple of Sri Ramakrishna, cannot imagine him without his mission. And Vivekananda had sought the participation of his brother-disciples in the spiritual work he was carrying out in the West. Two of them are to be particularly noted in the context of the present essay: Swami Abhedananda and Swami Saradananda. Swami Abhedananda too was a powerful speaker. According to his American disciple Sister Shivani (Mary Le Page), the “Swami was gifted with a deep and resonant voice…He was the most ordinate yet powerful speaker I have ever heard.”2 In comparison to many renowned public speakers she had heard — including the ‘silver-tongued orator’ William Jennings Bryon* and Franklin Delano Roosevelt**, “the man with the golden voice”, Sister Shivani claims that, “… the texture of Swami’s (Abhedananda’s) voice was different from the voices of these great speakers… it commanded, never implored nor besought. He could be heard at the end of the largest hall yet he never raised his voice.”3

The significant part of her observation is this one: “The Swami rarely gestured … always master of himself, he used none of those histrionic effects often practised by the best of speakers. The flow of that majestic thought held the listeners as in a trance by its clarity …. He spoke without notes or script as though impelled by the light of some dynamic power.”4

Swami Saradananda also was an influential speaker and it is interesting to note what he says about the body-language of public speakers. When someone pointed out that he (Saradananda) did not gesticulate during his speeches, he explained:

“To move one’s hands and use facial gestures in an effort to convince are great arts of oratory, and most speakers use these tools to make their lectures impressive. But Swamiji (Vivekananda) did not like it. He said: ‘During a lecture one should remove one’s ego and stand in front of the master humbly and calmly. He will make you speak whatever he wants and He himself will listen to it. When one speaks surrendering fully, then only that lecture carries the message of God.’” 5

He confesses that he himself had that “bad habit” (of facial and hand movement) which got corrected by Vivekananda in London.6

Both Abhedananda and Saradananda, like the other monastic disciples of Sri Ramakrishna, were under the loving and watchful eyes of Vivekananda after their Master’s samadhi. They in turn, had totally accepted Vivekananda as their leader, even before Sri Ramakrishna gave up his body. Abhedananda writes in his autobiography that when the young disciples were nursing Sri Ramakrishna during his last days at Cossipore, he and Sarat (Saradananda) “became especially attracted to Narendranath” and they “would be with him like his shadow” (italics added).7 Vivekananda was an inspirational figure to all his brother-disciples, especially to Abhedananda who emulated him thoroughly: “Through discussions with him (Vivekananda) my thirst for knowledge further increased day by day. Moreover in these respects I would imitate Narendranath to such an extent that….I would recite ‘Mohamudgar’, ‘Kaupina Panchaka’, ‘Vivekachudamani’, ‘Ashtavakra Samhita’ in the same way as Narendranath would do.”8 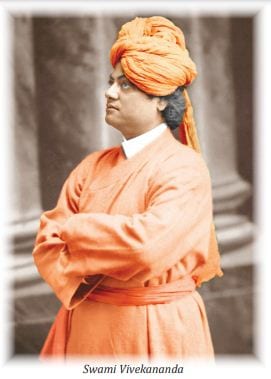 Now both Abhedananda and Saradananda in their teens had keenly listened to some famous orators like Keshub Chandra Sen, Surendranth Bannerjee, Aswini Kumar Dutta, Pratap Chandra Mazumdar and Lal Mohan Gosh. Abhedananda particularly made a diligent study of their lectures if we go by his autobiography: “I acquired experience of public-speaking by hearing the exposition of religion and preachings of Rev. Dr McDonald and other missionaries.”9

So then, these two brother-disciples had educated themselves in public speaking and it would be wrong to suppose that they were copycat versions of Vivekananda. Their master had ensured their spiritual growth according to their own nature and temperament. Each of them was as strong and independent a personality as Vivekananda himself. Abhedananda and Saradananda on their own had developed as forceful public speakers. However, Vivekananda’s companionship must have suggested to them the right stance to deliver their message as befitting their apostolic stature.

Even the most casual rendering of Vivekananda’s life compels one to acknowledge the power of his personality. Vivekananda himself knew the impact his own personality made on his listeners. A wondrous thing about him was that he took care not to allow his personality to influence his listeners. Which is why perhaps he maintained a ‘static’ posture while delivering his vibrant messages. He would be impersonal when teaching, allowing the voice its full play. One could say that from his standpoint greatest eloquence was when spirit spoke to the spirit. A fascinating account of the effect of his voice is rendered by Sister Devamata (Laura Glenn) who heard his speech in 1895: “He began to speak; and memory, time, place, people, all melted away. Nothing was left but a voice ringing through the void. It was as if a gate had swung open and I had passed out on a road leading to limitless attainment. The end of it was not visible; but the promise of what it would be shone through the thought and flashed through the personality of the one who gave it. He stood there — prophet of the infinitude.”10

About the Author: Prof. R. Ramachandra