—A Tribute to His Personality and Achievements

Swami Vivekananda’s birth centenary [1963] is being celebrated all over the country with fullest co-operation of the Central Government . . . Swami Vivekananda was like the great Adi Shankaracharya, an effulgent soul, unfortunately of short life duration. It was on 11 September 1893 that Swamiji gave his first public speech. On 4 July 1902 he entered into Mahasamadhi. But this short nine years of work made him renowned as a world thinker of eminence. We have received only a very small portion of his speeches and addresses, and that too thanks to his dynamic [English] disciple Goodwin, who, regrettably passed away after a brief illness in 1896 at Ooty in Tamilnadu.

Very many people—both Indian and Western admirers—have written about Swami Vivekananda. Under the tablet on his Samadhi Mandir are written the following words: ‘What Hinduism had needed was the organizing and consolidating of its own idea. What the world had needed was a faith that has no fear of Truth.’ 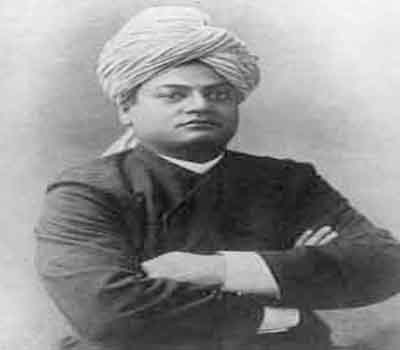 But for Swami Vivekananda thousands of people would have rejected the life-giving messages of Vedas based only on the dry unintelligible commentaries of the so-called Pundits. Swami Vivekananda talked with authority, as different from a Pundit because he could delve deep into the depths of what he spoke. He returned from this depth to fulfill the desire of his Guru, like Sri Ramanuja, to reveal its secrets to the lowliest and the lost, even those from other countries.

It was Swamiji who while declaring the experience based Supreme Truth, ‘Ekameva Adviteeyam’, at the same time included Dvaita and Vishishta Advaita, as the components and part of the realization of the Truth. In his view workplace and study room, the harvest store and field, each and every thing was as important for discovering Truth and realizing God—as important as a Temple with its sanctum and sanctorum—fit enough to realize God. For him service of man was service to God; Dharmic life was itself spirituality.

In short, more than anybody else it was Swami Vivekananda who made Hinduism wholesome, universal, vibrant and alive. No one could completely visualize India as Swamiji did—from the Himalayas down to Sethusamudra, see her as one and work for her regeneration comprehensively, undaunted by time and place. Among the worshipful heroes of modern India, Swami Vivekananda deserves the first and foremost place, more than Gandhiji, Nehru and Tagore. We can say with conviction that he truly had understood the Oneness and fullness of India based on the essential spiritual heritage of our country and its universal nature.

Swami Vivekananda’s pride in the country had no tinge of exclusiveness based on caste and creed. He urged Indians to be good Indians first.

A great Sannyasi and visionary that he was, he felt that Indian children should play football and consume good healthy food before studying Vedanta. No politician of India has understood the true state of Indian life as Swami Vivekananda. Standing on American soil he opened up before the Americans, who came to listen to Vedanta, the true picture of India and her poverty.

He was a prophet who openly declared that bereft of self-knowledge, self-confidence and pride in her own culture India cannot stand on her feet nor survive. If at all India has passed through all vicissitudes, the one and only reason for that is her time tested spiritual strength. Even today, what she can share with others is this spiritual treasure. When India forgets her spiritual essence, gives it up and acts contrary to her basic strength, that day India would lose her individuality [which he declared many times].

Deplorably, independent India has totally neglected this pristine quality of hers. Hence today she is in a pitiable condition of possessing everything yet owning nothing.

There has been no subject of study or field of activity in India that had not caught the considered attention of Swami Vivekananda, including all negative aspects of Indian life. He has provided the most relevant advices for their rectification as well. He was a sannyasi and patriot par excellence. He had up-todate knowledge in everything modern. His practical wisdom was unparalleled. He was courageous to extreme yet full of humility with abiding faith in the Lord Almighty. Not even a tinge of egoism spoiled his character. In every sense Swami Vivekananda was the creator of Modern India.

During this centenary celebration efforts are on to get Swamiji’s Complete Works translated into all Indian languages. That is the best possible way to celebrate his birth’s centenary. In this context one cannot but feel that these should have become a part of the compulsory curriculum of our college-going students.

As far as Kerala is concerned we can proudly claim that Swami Vivekananda is ours. Like a loving elderly Karanavar (Grand Uncle), he faulted Kerala as a lunatic asylum. He passed through Kerala as an unknown itinerant monk, met the great scholar Rishi of Kerala Chattambi Swamigal, proceeded to Kanyakumari and sat in meditation on the rock for three days and nights. It was there, standing at the southern tip viewing the vast Indian stretch that he received the inspiration to undertake the journey to the West. That foreign travel, visit to America and his famous Chicago Address made him known throughout the world. Hence for all of us in Kerala he should remain specially dear and worshipful.

Since Swamiji’s famous meditation on the rock at Kanyakumari the rock has come to be known as the Vivekananda Rock. Permission has been granted to construct a suitable memorial on the rock by the Devaswom and the Government. May this centenary celebration consolidate all liberal and positive forces, awaken them and energize them to stand as one and achieve the aim of creating the magnificent Vivekananda Rock Memorial.

About the Author: P. Raman Menon