(Continued from the previous issue. . .)

Yet another woman disciple of Swami Vivekananda was Mrs. Charlotte Sevier. If Josephine’s consistent backing helped the blossoming of the Belur Math, Mrs. Sevier was responsible for Swamiji’s dream of a Himalayan retreat come true. When Swamiji was traveling through Switzerland, Germany, and Italy with Captain and Mrs. Sevier for close to nine months, the Alps caught his imagination in a big way. We are told by Swami Nikhilananda that Swamiji was inspired to found a Himalayan monastery when he came to a small village at the foot of the Alps. He said:

Oh, I long for a monastery in the Himalayas, where I can retire from the labours of my life and spend the rest of my days in meditation. It will be a centre for work and meditation, where my Indian and Western disciples can live together, and I shall train them as workers. The former will go out as preachers of Vedanta to the West, and the latter will devote their lives to the good of India.4

Mr. Sevier speaking for himself and his wife, said:

How nice it would be, Swami, if this could be done. We must have such a monastery. 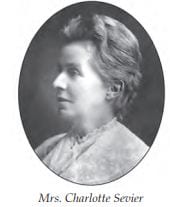 The dream was fulfilled through the Advaita Ashrama at Mayavati, which commands a magnificent view of the eternal snows of the Himalayas. It is yet another marvellous happening in the history of the Ramakrishna-Vivekananda Movement on how the dedication of Charlotte Sevier backed by her husband founded the Ashrama. Swamiji was delighted when they accompanied him to India after his first visit to the West. Charlotte, about fifty now, threw herself into making the Ashrama a viable reality. When the Vedantic magazine Prabuddha Bharata had to be shifted from Madras to Almora, Charlotte did a marvellous job of relocation. As St. Nihal Singh put it,

Never before had a good woman been led by her maternal instincts to assume an obligation that called for such ceaseless vigilance and drew upon the art and science of management, quite to the degree that Mrs. Sevier had been.5

A typical product of Victorian England, yet Charlotte Sevier was something more than a conventional housewife and perfect family woman. As the West was awakened by the Vivekananda phenomenon, this Sitalike Sahadharma-chari [a companion in living Dharma] to Captain Sevier wished to know the world of Vedanta and the discipline of yoga. At the same time, she was a British woman, practical in the matter of every affairs. So what drew her to Swamiji was his clear vision of the work to be undertaken both for spreading Vedanta and regeneration of his countrymen.

At the same time, Swamiji had made no attempt to draw his listeners away from their received religion and tradition. Charlotte had a sense of fulfilment as well as inspirations for the future from the much younger Swami Vivekananda. The Seviers had no children and here was a son after their heart. The Indian conditions were far from comfortable. But she had no complaint. She wore Indian clothes, meditated sitting like a marble statue, interacted with the villagers giving them advice when they asked for it, medicines and monetary help. The building of the Advaita Ashrama was a heroic endeavour, and Charlotte and her husband were cast in the heroic mould. Such was the power of Charlotte’s devotion for Swamiji and Vedanta.

The Advaita Ashrama was established and all seemed tuned to a rich future when Captain Sevier passed away. But Charlotte stayed back, facing the future heroically engaged in her yoga of divine works. She proceeded to put the Ashrama on a firm footing. The members would take the vows of poverty, chastity and obedience. Physical work would accompany study hours. Charlotte had green fingers too. Swami Vivekananda spent a fortnight at Mayavati in 1901, soon after his return from the west. He was delighted with what he saw. He wrote to Mrs Ole Bull on 6th January, 1901:

Mrs. Sevier is a strong woman, and has borne her loss quietly and bravely. She is coming over to England in April, and I am going over with her.

I ought to come to England as early as I can this summer; and as she must go to attend to her husband’s affairs, I accompany her . . . 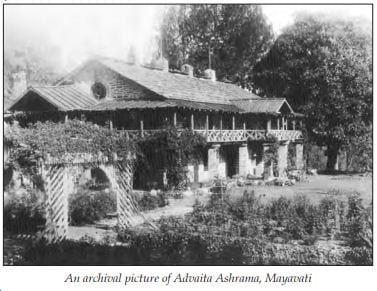 This place is very, very beautiful, and they have made it simply exquisite. It is a huge place several acres in area, and is very well kept. I hope Mrs. Sevier will be in a position to keep it up in the future. She wishes it ever so much, of course . . . Today I walked over the snow uphill about a mile, seeing Mrs. Sevier’s lands; she has made beautiful roads all over. Plenty of gardens, fields, orchards, and large forests, all in her land. The living houses are so simple, so clean, and so pretty, and above all so suited for the purpose.6

We have no record of Charlotte (or her husband) getting any formal initiation from Swami Vivekananda. Where a mother’s heart was concerned, there was perhaps no need for such formalities. Swamiji had spoken of her as ‘a jewel of a lady, so good, so kind’. Where was the need to say anything more? She had placed her wealth, her abilities and heart for doing something so close to Swamiji’s heart— the spread of Vedanta and service to the poor. When we learn that in her twenty-one years stay in India she was engaged in these twin tasks all the time, our heads automatically bow in adoration and respect for one whom the villagers near the Advaita Ashrama lovingly called as Bhagavati, the Divine Mother.

Swamiji and Charlotte exchanged letters. He called her Mother and she referred to him as a ‘dear son’. She bore with fortitude his Mahasamadhi and proceeded with the works dear to him. The image we have of her as she lived as a Tapasvini and served India in ways dear to Swamiji purifies our thoughts no end.

Charlotte’s life at Mayavati was remarkable. She was a founder and trustee of Advaita Ashrama, which entitled her to make important decisions about its objectives and operations. She was a mother to the monastic members and to the villagers who came to love and respect her. In many respects Charlotte lived as a nun, one who combined the best of Eastern and Western monastic practices.7

With all her responsibilities in managing the Ashrama, she found time to look after vegetable and flower gardens. She edited the articles that came for Prabuddha Bharata and undertook the onerous responsibility of editing The Complete Works of Swami Vivekananda and The Life of Swami Vivekananda. Though far away from the land of her birth and her people, Mrs. Sevier managed never to be bored in the isolated spaces of Advaita Ashrama in Mayavati or Vivekananda Ashrama in Shyamla Tal. Like the divine armaments of Vishnu incarnating along with the Supreme Lord, the disciples had incarnated along with Swami Vivekananda to help him in his mission. The rock-solid work done by Mrs. Sevier for the Movement will ever remain a fragrant memory for all time to come.

Of the many women disciples and admirers of Swami Vivekananda, those who received initiation from him directly were very few. Of them, three stand out: Mrs. Ole Bull, Sister Christine, Sister Nivedita. Indeed, the first western lady to be initiated by him into the monastic order was Marie Louise who was given the name Swami Abhayananda. But she broke away from the connection when she came to India and began to preach independently. We are given to understand that her materialist ambitions had drawn her away. All the same, Swamiji himself never reviled her and let her go her own way.

Sarah Ole Bull (1850-1911) was the wife of a well-known Norwegian violinist. She had married Ole in 1868 and they had a very happy married life. She was his pianist and together they held house which was a gathering place for leading intellectuals of their time like William James and George Santayana. Ole’s death in 1880 was a great blow to Sarah. She continued to be active but her interests shifted to philosophy. She met Swami Vivekananda in 1894 and found in him a kindred spirit. As with Mrs. Sevier, Mrs. Bull also became a mother to Swamiji who named her Dhira Mata, the Serene Mother. In her he found a compassionate heart ready to help with his work for the resurgence of Indian women. She was a generous giver to the RamakrishnaVivekananda Movement as also people from outside who were associated with it like Jagadish Chandra Bose, the eminent botanist. 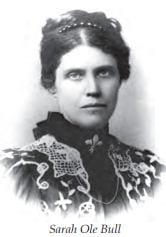 Mrs. Bull’s admiration for Swamiji was both for the man and his enormous knowledge and deep spirituality. She writes to Mary Hale in April 1895 which seems a good example of perfect observation:

He worked continually and faithfully; his lectures requiring on his part reading and careful thought. His teaching in class was so clear and gentle in spirit that I felt it to be perhaps the best of all his work. It has served to call together earnest people among those who came to him, and I hope that a center of work for him in this country may be the permanent result of it all. He is tired now, but rest will soon make all the positive good apparent to him. The real character of the man and his work are now known to many and at any time may be resumed, as there are those who would always gladly welcome and assist him . . . All who know him love the beauty of his life and he brings with him the realization of all good and noble endeavor Godward.8

As for Swamiji, Mrs. Bull was one to whom he could express his reactions to men and matters with perfect ease. There was such a depth of calm in her approach to life which steadied at once persons affected and afflicted by everyday life. The spontaneity of Swamiji’s utterances bridged the gap of spatial distance in a trice as when he wrote to her on 20th March, 1901. His health was not too good but this does not show in his enthusiastic love of his motherland:

My dear Mother, at last I am in Eastern Bengal. This is the first time I am here, and never before knew Bengal was so beautiful. You ought to have seen the rivers here—regular rolling oceans of fresh water, and everything so green—continual production. The villages are the cleanest and prettiest in all India. . . I am peaceful and calm— and am finding every day the old begging and trudging life is the best for me after all.9

To borrow from current idiom, Swamiji’s networking was amazing. Constantly the good in one person was conveyed to the rest. As when he refers to Mrs. Bull as an angel when writing to another woman disciple from America, Christine Greenstidel. One comes across amazing tales of idealism, endurance and selfless work when studying the lives of persons who had been drawn to Swami Vivekananda. Sister Christine’s life is one such saga of self-giving from a nature thoroughly selfless.

About the Author: Prema Nandakumar