The year was 1888 and Swami Vivekananda was travelling towards Hrishikesh. On the way he got down at Hathras Station whose station master was Saratchandra Gupta. Swamiji’s bright eyes and happy countenance attracted Gupta. He approached Swamiji and asked ‘Well Babaji, why are you sitting here? Won’t you go further?’ Swamiji answered, ‘Yes, surely I will go.’ Gupta came closer and said, ‘Babaji, would you like to have a smoke?’ In a detached way Swamiji replied, ‘Yes, if you offer me one.’ Gupta then requested with folded hands, ‘Maharaj, you seem to be hungry. Please come to my home. I stay there alone.’ Without spending another word Swamiji accepted his invitation.

Reaching his home Swamiji asked, ‘Well, how are you going to entertain your guest?’ In reply the host recited some lines from Hafiz. ‘O my Beloved, you have come to my house. I shall prepare the most delicious dish for you with my heart’s blood.’ This selfless surrender of Gupta expressed in Hafiz’s words immediately won the heart of Swami Vivekananda; Gupta soon became the first monastic disciple of Swamiji.

Shams-ud-din Muhammad Hafiz (C. 1320- 1389) a Persian poet, considered by many as a literary wonder and the epitome of Persian literature has had a pervasive influence on mankind.

His strong influence is seen even on some of the great minds of the West. Goethe declares, ‘Hafiz has no peer.’ Ralph Waldo Emerson, the American Transcendentalist writing about Hafiz says: ‘He fears nothing. He sees too far, he sees throughout; such is the only man I wish to see or be.’ He calls Hafiz ‘a poet for poets’. After Emerson’s 1858 Atlantic monthly article, ‘Persian Poetry’, it was no longer intellectually respectable to be wholly ignorant of Hafiz. Emerson’s first volume of poems (1847) included two translations from Hafiz, one of them excerpted from his longest poem, the ‘Saqi-nama’.

Hafiz‘s poems were also admired by such diverse personalities like Nietzsche and Arthur Conan Doyle; Doyle’s wonderful character Sherlock Holmes quotes Hafiz. Even Queen Victoria was said to have consulted Hafiz in times of need – which has been a custom in the Middle East for centuries. The Fal-e Hafiz, is an ancient tradition in which a reader asks Hafiz for advice when facing a difficulty or at an important juncture in life – treating his books as an oracle and opening them with a deep wish from the soul for guidance.

The Poems of Hafiz

Hafiz was a rare master of ‘utility of light’ or ‘the Sun’, and ‘the utility of art’. His poetry has the ability to comfort, enliven and enrich those in need. Perhaps one of the greatest attributes and values of art is to capture a person’s attention, for when beauty does that, the witness always benefits. As Hafiz says: 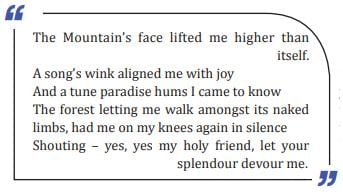 Every single line of Hafiz tries to light a candle in our heart, and support our perennial need to have fun, laugh and dance, ‘to lift the corners of your mouth’. Again, he writes: 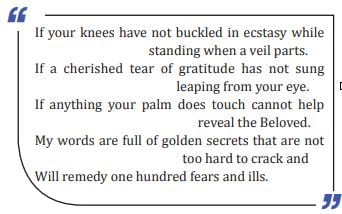 Many of Hafiz’s poems are precisely about unfettering the senses and refining the will, so that we do more ‘wine–tasting of the sky’, and more tenderly holding – in thought or with arms – the things we most love and know as precious nourishment. Jason Espada in his Introduction to Daniel Ladinsky’s Selection of translations of Hafiz’s poems, declares that Hafiz’s ‘poetry outlines the stages of the mystic’s “path of love”; that journey of inner unfolding in which love dissolves personal boundaries and limitations to join larger processes of growth and transformations. Through these processes human love becomes divine love and the lover merges ultimately with the source and goal of all love, which Hafiz calls the Divine Beloved.

Once a young woman came to Hafiz and said, ‘What is the sign of someone knowing God?’ Hafiz stood in silence for nearly a minute, then lovingly looking deep into the young woman’s eye, softly asked, ‘My dear, they have dropped the knife. The person who knows God has dropped the cruel knife most so often used upon their tender self – and others.’

Narendranath Datta (later Swami Vivekananda) was introduced to Hafiz by his father Biswanath Datta, who was a linguist and knew Persian and Arabic. Biswanath took great delight in reciting Dewan–i–Hafiz. Hafiz, who ‘drew a circle in the ground and remained within that circle for forty days,’1 determined to become Awakened, attracted the young God-seeking Narendranath. After his awakening, for ‘the next nine years until his death, Hafiz wrote more than half of his total body of poetic work (these are the poems which are considered to be the true core of his teaching) and taught students of his own as a Sufi Master.’2 Narendranath’s sensitive mind is sure to have soaked in the multiple dimensions and depths of Hafiz’s poems.

It is interesting to read Swami Vivekananda’s poem ‘The Cup’ alongside Hafiz’s ‘Pass Around the Cups Fair Maiden’. 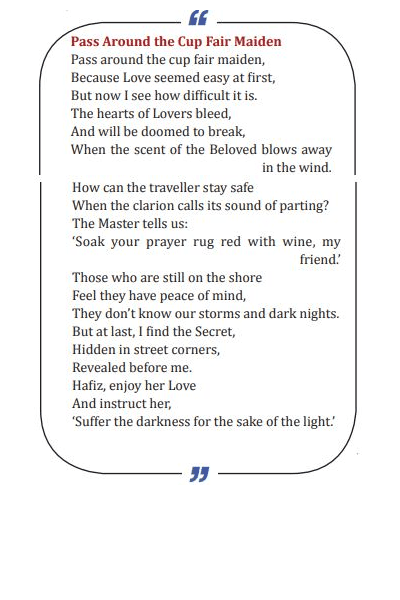 In the first part of the poem Hafiz clearly states that the love which once had seemed to be very ‘easy’, now appears quite difficult. So he doesn’t want to enjoy ‘wine’ from the cup of love anymore. Like the Buddha, the illumined soul, he realizes that lovers have to bleed a lot, ‘falling upon the thorns of life’. The Master demands more and more. He wants the disciple to ‘soak his prayer rug red with wine.’ Those who are still on the shore and have not yet jumped into the sea, have not known its waves and risks, do not understand ‘the dark nights and storms’ a real practitioner has to go through in his spiritual journey. It reminds us that the path which leads to spiritual enlightenment is not at all smooth. But however tiring the journey, ultimately Hafiz discovers the ‘secret’ which was surprisingly hidden in street corners. So now an enlightened soul himself, he advises his friend to suffer the darkness with courage because that can only bring one at the feet of light. 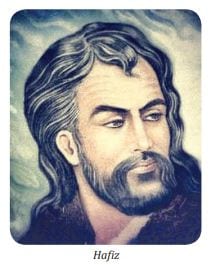 As noted by his friends and peers, Swami Vivekananda had a poetic temperament and his poems, concurring with Mathew Arnold’s idea of true poetry, were conceived and composed in his soul. He was a spiritual dynamo who perceived the divinity around him. At the same time, he was acutely aware of the exultations and the tribulations of a human life. He has his own unique sense of mysticism, which sets him apart from other poets. He was a prophet and his poetic attempt to capture in words the ethereal flashes give his verses a majestic force. These poems are also a window to the struggles, hopes, and joys of this hero who yoked a life of renunciation with public service.

The biography of Swamiji states: ‘Poetry, because it is the language of ideals, made a strong appeal to Naren. Wordsworth was the fixed star of his poetic firmament. He lived in a world of ideals, where history and philosophy, poetry and all the sciences, are recognized as phases of Reality. He possessed a prophetic vision of learning, wherein thought was seen as subservient to the real purpose of life, ideas and ideals being the fuel which the soul burned in its supreme effort to go beyond intellect, beyond thought.’’3

Mrs. Funke, one of Swami Vivekananda’s followers, recalls, ‘A bird, a flower, a butterfly will start him off, and he will tell us stories from the Vedas or recite Indian poetry. I recall one poem started with the line “Her eyes are like the black bee on lotus”. He considered most of our (American) poetry to be obvious, banal, without the delicacy of that of his own country.’ His poems are vibrant and rhythmic and exude dynamism. R. C. Majumdar writes about Swamiji, ‘Some of his English poems have reached a sublimity of no mean order. The best and most famous of them is Kali The Mother’. 4 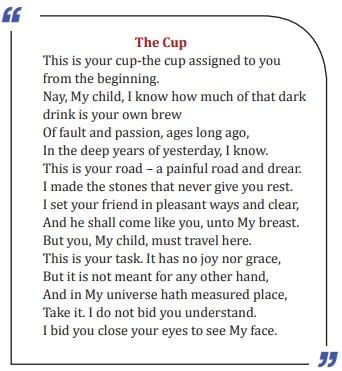 The poem appears fatalistic in that it says each person is allotted a ‘cup’ of dark brew that he alone must drink. Here the ‘cup’ and the ‘dark drink’ refer to fate and destiny, which is the result of the person’s own actions. Like the Buddha, Swami Vivekananda realizes that life is full of sorrow and declares the road to be painful and drear. Hafiz, we have already seen had his ‘storms and dark nights’. Swamiji’s God doesn’t hesitate to declare that ‘you’ have to go through this arduous path to reach Him, whereas others might be blessed with smooth serene ways of life. In Swamiji, one has no option but to accept the cup of life full of bitterness and poison. There’s no question of understanding it. The unknowing understanding would rather reveal His true identity before the seeker. Just a selfless, complete surrender is what Swamiji’s God expects from us. Hafiz too advises us in his poem to suffer the darkness for the sake of the light definitely following it. In both the poems, struggle and suffering is a common thing that a seeker has to bear throughout his life and the more sincerely he resigns to the Will of the Lord, the deeper is his vision and enlightenment. 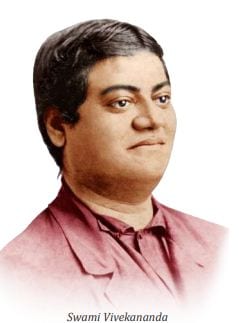 1) Gates of Wisdom: The poems of Hafiz (A New Interpretation). Swami Anand Nisarg

3) The Life of Swami Vivekananda by His Eastern and Western Disciples. 1:105

About the Author: Suman Bhattacharya