As part of her research work on ‘Chronology of Life of Swami Vivekananda’, from the Centre for Indological Study and Research, Ramakrishna Mission Institute of Culture, Golpark, Kolkata, the author visited Sri Lanka for eight days from 24 Feb 2019 to trace Swami Vivekananda’s footprints in Ceylon (Sri Lanka). She was accompanied by Sri Arunoday Kundu, Assistant for audio-video recording, and Sri Sanmukhanathan, a retired officer, Department of Religion, Government of Sri Lanka, presently honourary librarian, Ramakrishna Mission, Colombo as volunteer.  E-mail: shyam1725@yahoo.com

On his way to attend the World’s Parliament of Religions, Swami Vivekananda visited Colombo on 6/7 June 1893. Starting from Bombay on 31 May 1893, the ship, the ‘Peninsular’ halted at Colombo for the day-time. As an unknown sannyasi, Swamiji joined his fellow passengers in visiting the city. His primary visit was to the Kelaniya Raja Maha Vihara, which is around 11 kms from Colombo. The Kelaniya Buddhist Temple is famous for its image of the reclining Gautama Buddha and paintings depicting events from his life. 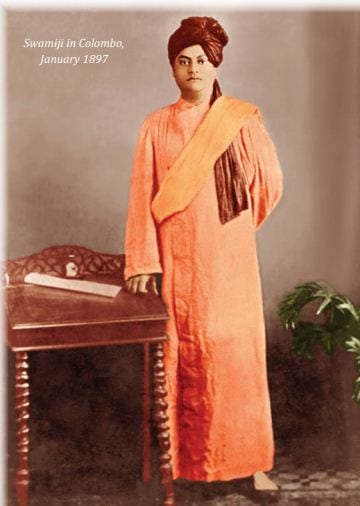 On his return from the West on board the ship, the Prinz Regent Luitpold, Swamiji arrived at Colombo for the second time in the afternoon of 15 January 1897. He was now India’s ‘National Hero’ and he was given a jubilant welcome by the citizens of Ceylon. A grand reception was arranged by the representatives of various religious sects and social bodies. Swamiji stayed in a bungalow at 96 Barnes Place, Cinnamon Gardens. This bungalow was later renamed as ‘Vivekananda Lodge’. Swamiji stayed for 4 days in Colombo and proceeded to Kandy by a morning train on 19 January. After visiting Anuradhapuram and Jaffna, he left for main-land India on 26 January 1897.

On his way to the West for the second time on the ship S.S.Golconda, Swamiji along with his brother-disciple Swami Turiyananda, and his disciple Sister Nivedita reached Colombo in the morning of 28 June 1899. Swamiji’s admirers in Colombo had procured a permit for landing. Mr Arunachalam, Hon’ble P. Coomaraswamy, Lady Coomaraswamy – an Englishwoman, their son Ananda Coomaraswamy and other friends came to meet Swamiji. Sister Nivedita in her letter to Miss MacLeod on 5 July 1899 wrote that Swamiji visited Mrs Higgins boarding school for Buddhist girls, and the monastery of Countess of Canovara. Swamiji and his party boarded their ship the same evening. The crowd cheered with the praise of Lord Shiva and ‘Swami Vivekanandaji Ko Namaskar!’

We visited Kelaniya Raja Maha Vihara which Swamiji visited on his first trip in 1893. We then went to 96, Barnes Place, Cinnamon Garden where Swamiji stayed on his second visit in 1897. It was then a newly built residence of Sri Ratnasabapathy. Swamiji’s companions—his brother-disciple Swami Niranjananda, who had come from India to greet Swamiji in Colombo, Swamiji’s Western disciples Mr & Mrs Sevier, Mr. J.J.Goodwin, and the English Buddhist T.G.Harrison were also accommodated in this house. As Goodwin writes in his letter to Mrs. Bull on 26 January 1897, Swamiji and his party were the first residents of the house. This house, later renamed as ‘Swami Vivekananda Lodge’, was demolished in 1934. In its place now there stands a modern two-storied building, and the area is an aristocratic, protected area. We were asked not to enquire about or talk to the present owner of the house without prior permission from the Administrative Authority.

On 16 January 1897 evening, Swamiji delivered a talk on ‘Punyabhumi Bharat’ in the Floral hall. At this place there now stands Chalmers Granaries and a car park.

Sri Ponnambalavaneshwarar Kovil, the Shiva temple which Swamiji visited in the evening of 17 January 1897 was our next destination. An inscription which was placed there on 17 January 1997 to commemorate hundred years of Swami Vivekananda’s visit to this temple is now not traceable. But on the occasion of the 150th birth anniversary of Swami Vivekananda, to commemorate his visit to the temple, the temple authority installed a golden statue of Swamiji in the temple premises.

From this Ponnambalavaneshwarar Kovil, on the request of Thambyah Mudaliyar a Reception Committee Member, Swamiji visited the Thambyah Chatiram which is just two buildings away from the temple. The Chathiram, established in 1880 was the only lodging for local and Indian Hindu pilgrims. Later in time, seven other direct disciples of Sri Ramakrishna—Swamis Shivananda, Niranjanananda, Ramakrishnananda, Abhedananda, Vijnanananda, Turiyananda, and Trigunatitananda stayed in Thambyah Mudaliyar Chathiram at different times when they came to Sri Lanka to preach Vedanta. There is now a small shrine in Thambyah Chathiram which was inaugurated by Srimat Swami Gautamananda Ji, one of the Vice Presidents of the Ramakrishna Order on 7 August 2017. 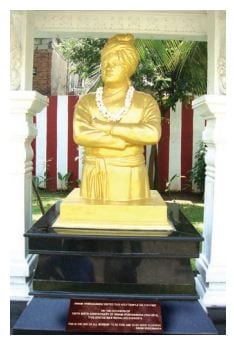 There is a plaque in this shrine declaring ‘Swami Vivekananda and other direct disciples stayed here’. The book The Ramakrishna Movement in Sri Lanka by Swami Virupakshananda too says so. But in The Life of Swami Vivekananda: By his Eastern and Western Disciples, it is stated that Swamiji did not stay that night at the Chatiram. He returned the same evening to 96, Barnes Place and conversed with a number of brahmins until half past two the following morning.

On 18 January1897 Swamiji paid a visit to Mr Chelliah’s house where he saw a picture of his own master Sri Ramakrishna. This house has not been traced . That evening Swamiji delivered a lecture on Advaita Vedanta at the Public hall of Colombo before a large audience. Today, this Public hall is not traceable.

On 19 January 1897, Swamiji started for Kandy by train in a special railway saloon owned by Tambyah; he was accompanied by Sir P. Arunachalam.

The present Colombo Fort railway station is a modern building. The old one (used during Swamiji’s journey in 1897) has been replaced by the Secretariat Hall and is under military control. Swamiji reached Kandy around 11:20 am. The Railway station in Kandy still exists; it is modernised and extended.

Swamiji visited The Temple of the Sacred Tooth Relic, the famous Buddhist temple in Kandy before journeying onward to Matale. The head of the Colombo Sarada Mission, and the Matale Sarada Mission and the Secretary, Batticaloa Ramakrishna Mission assume that Swamiji halted for the night at some devotee’s bungalow at Matale.

Our next stop was Jaffna where we visited the Jaffna Hindu College. The present Principal and English teacher took us to the Prayer Hall where Swamiji was given the address of welcome on 24 January, 1897 by the founder advocate Sinathamby Nagalingam. Presently a statue of Swamiji adorns the stage. On 25 January in the college premises, under a large shamiyana Swamiji spoke to over 4000 people on Vedantism. This spot is presently occupied by the College library buildings, offices and a Shiva temple. The then Head-Master (Principal) of the Hindu College was Mr N. Selvadurai (1892-1909).

We visited the District library, Vennarpannai Shivan temple and the adjoining Kathiresan (Murugan or Kartikeya) temple where Swamiji offered worship on his way to the Hindu College on 24 January 1897. 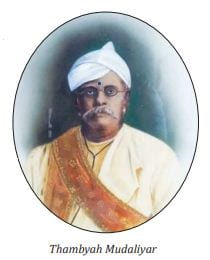 We saw the Kankesanthurai harbour ( K K S Harbour) from a distance, as it is currently under military control. It was probably from here that Swamiji took the steamer to reach Pamban Road, India on 26 January 1897.

It is known from R Rajahmahendrasingam of Ramakrishnalayam, Adiapatham Road, Jaffna that Swamiji stayed in the residence of Proctor Ponnampalam situated near Central College in the main street of Jaffna. This bungalow was demolished in the Sri Lankan civil war. 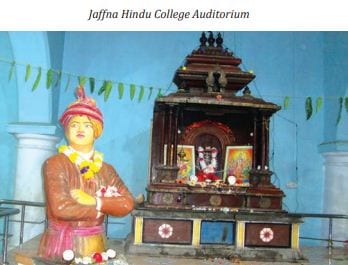 From Jaffna we started for Anuradhapuram and on the way stopped at the Elephant Pass Bridge where Swamiji was received by the elites of Jaffna and taken in a procession to the Hindu college. We also stopped at Vavoniya where Swamiji was given a welcome by the local people.

In Anuradhapuram, Swamiji visited the sacred Bo tree, a shoot of the original Bo tree of Buddha Gaya, brought by Princess Sanghamitta, daughter of Emperor Ashoka. Swamiji delivered a lecture on ‘Worship’ under the shade of this Bo tree; it was interpreted in Tamil and Sinhalese. Swamiji also visited the ruins of the old city palaces and Dagobhas (Dhagaba) or Stupas, the dome shaped Buddhist shrines.

From Anuradhapuram we returned to Colombo and visited the Colombo Sarada Mission, and the Colombo Port where Swamiji had landed.

We returned to India with a better understanding of Swami Vivekananda’s association with Sri Lanka.

About the Author: Dr. Shyamali Chowdhury