Swami Vivekananda’s first three speeches at the Parliament of Religions in 1893: ‘Response to Welcome’ (September 11), ‘Why We Disagree’ (September 15), and ‘Paper on Hinduism’ (September 19), were respectively an appeal for tolerance or acceptance, an appeal for interfaith understanding, and a profound exposition of Hinduism. But it was a different story on September 20 (‘Religion not the Crying Need of India’). That was a speech accusing the Christian missionaries in India of trying to save the souls of the heathen instead of trying to save their bodies from starvation. He was not scheduled to speak that night. It was a fortuitous coincidence that some of the speakers didn’t show up and the audience persuaded him to take the podium. The Chicago Inter Ocean of September 21 reported the following as to what happened just prior to his actual speech:

At the close of the reading of Mr. Headland’s paper on ‘Religion in Peking’ Dr. Momerie announced that the other speakers bulletined for the evening had failed to appear. It was but 9 o’clock, and the main auditorium and galleries were well filled. There was an outburst of applause as they caught sight o f the Hindoo monk, Vivekananda, sitting in his orange robe and scarlet turban upon the platform. This popular Hindoo responded to the generous applause by saying that he did not come to speak tonight. He took occasion, however, to criticize many of the statements made in the paper by Mr. Headland. Referring to the poverty which prevails in China, he said that the missionaries would do better to work in appeasing hunger than in endeavoring to persuade the Chinese to renounce their faith of centuries and embrace Christianity at [as] the price of food. And then the Hindu stepped back on the platform and whispered to Bishop Keane, of the Catholic church, a moment. He then resumed his address by saying that Bishop Keane had told him that Americans would not be offended at honest criticism.

This is the first time we see Bishop Keane entering the ‘Vivekananda Orbit’. It is highly likely that they had some prior discussions on that general subject. The absence of the scheduled speakers in that time slot gave Swamiji the opportunity to speak. We will see later how the bishop’s views coincided with those of Swamiji.

Who was Bishop Keane?

It may be appropriate at this point to introduce Bishop John Joseph Keane (1839- 1918), then the rector of the Catholic University of America in Washington, D.C., and also the bishop of Richmond, Virginia. Bishop Keane was known for his liberal and progressive views. Although the Catholics were discriminated against in the 19th century, he strongly advocated the full representation of the Catholic Church at the World’s Parliament of Religions. His deep commitment to education, and to interfaith understanding were legendary. He constantly reached out beyond the confines of his church, and was the first Catholic bishop in Virginia to preach to the AfricanAmerican community. His liberal/ progressive worldview drew the ire of conservative members of the Catholic Church hierarchy and he was forced to resign his rectorship in 1896.

Christ would
bless poverty,
but would never
bless destitution

Bishop Keane was a friend of the poor and disenfranchised. He worked tirelessly for the social and cultural uplifting of the working classes and for the rapid assimilation of immigrants into American life. He drew a distinction between the poor and the destitute. Just before he expressed his support on September 21, 1893 at the Parliament (as reported by the Herald) for Swamiji’s views, the day before, he had said, ‘Christ would bless poverty, but Christ would never bless destitution. Christ was poor, his apostles were poor, but Christ and his apostles never were miserable and destitute. It is a mistake to suppose that the Church of God gives any sanction or benediction to destitution or wretchedness.’ There is a subtle difference between poverty and destitution. While poverty is a state of being materially poor or indigent, destitution goes beyond poverty; it implies reduction to a state of abjectness—a degrading mental state. The distinction is important, because Swamiji had taken vows of chastity, poverty, and mendicancy—but not of destitution.

On September 21, the day after the whispered communication between Swamiji and Bishop Keane on the platform, the bishop was reading a long paper by one Charles F. Donnelly at the Parliament, titled ‘The Relation of the Roman Catholic Church to the Poor and Destitute.’ But he paused during the reading and said, as reported by the Chicago Herald of September 22, 1893 (page 10):

…..My heart was glad when I listened last night [September 20] and heard our good friend, the Hindoo, confess that for years he did not know where he was going to get his next meal. That was the way with these poor Franciscan monks. They were reduced to poverty in order that they might better consecrate themselves to the service of God everywhere. And let me also say here, because it is in close connection with the thought printed in the paper [Mr. Donnelly’s paper], from my heart I indorse the denunciation that was hurled forth last night against the system of pretended charity that offered food to the hungry Hindoo at the cost of their conscience and their faith. The question might well be asked whether among Christian people such a system was possible, and yet we have only to look back to the history of famine in Ireland in order to know that such things have been. A shame, a disgrace to those who call themselves Christians. But I am happy to state, in answer to a half question also asked last night, and in connection with this subject, that in China and in India, the Sisters of Charity and the Little Sisters of the Poor have many institutions in which they are pledged by holy vows to care for the indigent, no matter what might be their faith, without asking any man to be guilty of the sham hypocrisy of pretending conversion in order to get bread. [Applause.]

I will go further and say: We were startled at the denunciation that came also from the heart of the Hindoo monk last night, of the Christian system of the atonement, as he understood it. I sympathize with him from his standpoint. There have been men who through a mistaken piety have so exhausted the supremacy of God as to utterly annihilate all responsibility and the co-operation of the human free will. For any such system or the idea of the atonement of Christ I have no more sympathy than has our Buddhist [sic] friend. I say to him let him go on criticizing the Christians, we do not hear half enough of this. I firmly believe in the principle laid down by dear Bobby Burns [Robert Burns]:

O wad some power the Giftie gie us
To see oursels as ithers see us. [Applause]

And if by these criticisms Vivekananda can only stir us and sting us into better teachings and better doings in the great work of Christ in the world I for one will be profoundly grateful to our friend, the great Hindoo monk. [Applause.] 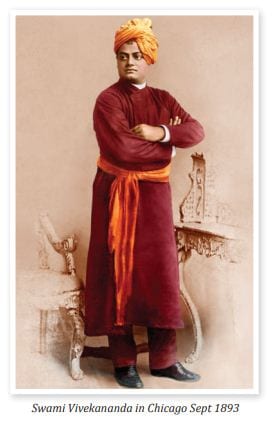 A friend in deed

Swamiji rarely received such public endorsement of any clergy in the U.S., and that too in front of an international audience of Christians of all denominations. He must have been in the audience listening in appreciation to every word of it and must have been grateful to the bishop for his support. It is important to note that the bishop said things that Swamiji had left unsaid. 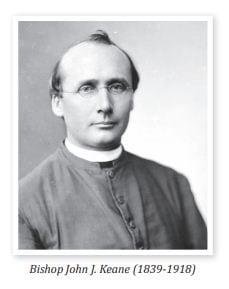 It is unfortunate that very little is known about their interaction during the rest of the Parliament days and thereafter; maybe there wasn’t any. Swamiji was in Washington, D.C., the home of the Catholic University of America, in the fall of 1894, but there is no record of his meeting with Bishop Keane, who had spoken his mind against the ‘system of pretended charity’ of Christian missionaries in Asia. The bishop’s defense of the Hindu monk probably did not sit well with the conservative leaders of his church, and might have been added to the list of his other unorthodox views that led to his forced resignation from the rectorship three years later.

Bishop John Joseph Keane will always be remembered as Swamiji’s friend in need. They were of the same mindset. Swamiji consulted with him before firing his salvo of criticism against Christian missionaries; and the bishop came back, praised him for it the next day, and did more of the same.

About the Author: Asim Chaudhuri