The following reminiscences written on a folded piece of paper were found among a bundle of books and papers preserved by the family of Mrs. Ruma Mukhopadhyay, the youngest daughter of Shailendra Nath Bandopadhyay, living in Kolkata. The paper was kept in a Webster’s dictionary supposed to have been used by Swamiji and was discovered in April 2014 when she handed over the bundle to Tarit Kumar Bandhopadhyay, former Associate Professor in zoology at Raja Peary Mohan College, Uttarpara, district Hooghly, West Bengal, and a researcher in Swami Vivekananda and a devotee.

The Bengali translation of these reminiscences was done by Tarit Kumar Bandopadhyay and it was published in Nibodhata, Bengali bi-monthly published from Sarada Math, in its July-August 2014 issue.

Today at a mature age, I can only think of my meeting with Swamiji [Vivekananda] and Sister [Nivedita]. Till day, [many of my] friends and relatives have requested me to [record my] meeting [with them], but I really don’t know why I never had the urge to pen down the experience earlier. Now as an ailing man waiting for death, I feel the need to write about those memories that are forever etched in my mind.

When Swamiji first came to our Darjeeling home (in Bolem Villa), then my age was either eleven or twelve. I did not pay attention to studies too much then; I only used to while away my time by playing with my friends. 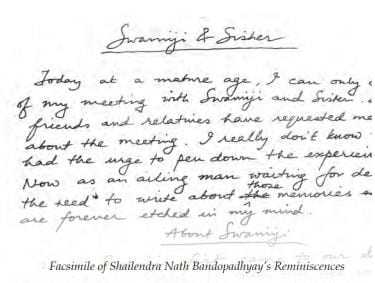 Swamiji used to like us a lot. Brothers next to me were quite small (Dijendranath was 6 years younger while Rabindranath was only 4 years). Other brothers (elder brother Bolendranath and middle brother Bhupendranath) were involved in their respective work. I was the only one going to school. Thus I became Swamiji’s constant companion during his morning and afternoon walk[s]. 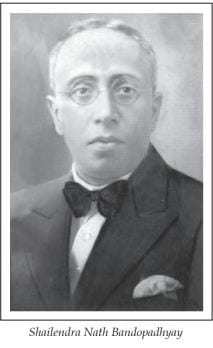 I used to call some of my friends as well. Swamiji used to walk dressed in hat-coatboot with stick. He used to tell amusing tales which I still cherish. One such day, while on a stroll, we suddenly chanced upon an old woman porter who stumbled under the burden of the weight she was carrying. It was really painful. She was struggling to get up. Suddenly Swamiji sat down uttering ‘ugh’. We thought that he was not feeling well. I asked, ‘Are you feeling some pain? Then let’s go back home’. Swamiji, after a moment, said to us, ‘Cannot you see the plight of the old porter?’ Today I can understand the significance of his condition. He was so sensitive to the suffering of others that he used to feel every sensation within his own body. Afterwards, people helped her [the porter] to reach home. My mother took responsibility of the porter when she heard of her plight.

When Swamiji came to our house for the second or third time, my mother asked, ‘Nothing is happening to Shaila [referring to me]; what can be done about him?’ Keeping quiet for some time, he said, ‘Send him to Belur Math.’ He further added, ‘He will study there for some days, which will make him self-sufficient. It will help him in his life.’ That day those words didn’t mean much to me. However, his suggestion proved vital for me in future. From 1899 to 1902, I stayed at Belur Math, studying at Bally school and later at Presidency College.

While staying at our house, once Swamiji fell ill—with virulent diarrhea. His clothes were getting soaked regularly. My mother got very agitated. Swamiji became so frail that he could barely walk. I was then entrusted with the duty of changing his clothes, and cleaning his body. I used to provide him medication according to the instructions of the doctor. Under the guidance of doctor Davis, he recovered to health after six-seven days.

I used to meet Swamiji now and then at Belur Math—mostly in the afternoon. Then five- six boys used to reside at Belur Math. It was mandatory to play football and do extensive running in the afternoon. Sometimes, Swamiji used to inspect whether all the boys were present. If someone was absent deliberately, then he would scold him. We also learnt swimming from Swamiji. Swimming was a Sunday fixture.

Another detail that I remember is Swamiji’s instruction to us regarding the preparation of watermelon ‘sherbet’. One summer afternoon Swamiji called me. He enquired whether I knew how to make watermelon sherbet. When I replied in the negative, he wanted me to fetch a sieve. He also instructed me to bring a metal pitcher. When I brought them before him, he gave me the order to cut watermelon pieces. After scaling off the exterior, I kept the watermelon pieces in the metal pitcher. Then using a churning stick, the solid pieces of watermelon became liquid. After filtering it with the sieve, we added a pinch of salt. He ordered me to call others so that they can share the sherbet as well. Drinking the watermelon sherbet, he certified it was excellent.

When Swamiji came to Darjeeling for the last time my mother said to him that my brothers had already taken ‘Mahamantra’, and requested Swamiji to give ‘mantra’ to me as well. Swamiji then said, ‘Shaila, I will instruct you today only; come to my room.’ Once inside Swamiji’s room, he requested me to close the door. On the floor, he sat before me. Then he imparted the ‘Mahamantra’ into my ears by uttering it three times. I stuttered the first time and he corrected me. Then he assiduously taught me the way to take the Mahamantra. Afterwards, he gave me some money from the pocket and keeping it on the table said, ‘Give me a paisa.’ After doing so, I bowed down to take his blessing. He kept his hand on my head. At that very moment, a unique sensation went through my body—a sensation that I cannot describe in words.

During the demise of Swamiji, I was not at Belur Math as I was engaged in some work at Darjeeling. However, I cried a lot that day. In fact, he came in [my] dreams afterwards—the image of Swamiji that lingered in my mind, that of him wearing hat-coat and boots. He seemed to say that I am with you only — ever present here, as long as you will live. 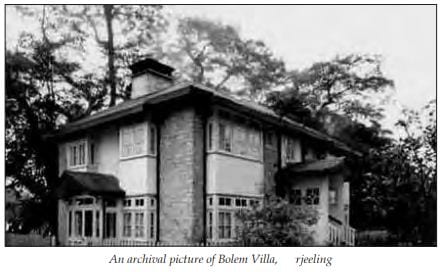 The second meeting with her is a curious incident. During that time, a lot of Swamiji’s foreign disciples used to stay at Belur Math. One day Sister came to pay a visit to Belur Math from Bagbazar in a boat travelling across Hoogly river. It was raining slightly in the afternoon. The grass ground became a bit muddy. Sister was brisk walker. That day, somehow her slippers got stuck in the mire. She grew mildly agitated. She then tried to explain her situation to the companion Sadhu. On seeing the situation Swamiji was laughing from the verandah of his room. I was standing close. He instructed me, ‘Shaila, run fast to clear Sister’s slippers’. I followed his orders. I asked her to hand over her slippers. Sister initially refused and she herself stood aside from the mire to pick up the slippers. As the companion Sadhu looked on, I ran with the slippers taking them from her hand. They began to wait for me. Once I cleaned her slippers, I handed them over to her. She blessed me by keeping her hands on my head, ‘Oh sweet naughty boy!’ She was having difficulty in uttering my name, ‘Shaila’ and instead called me as ‘Salen’.

Since Sister was acquainted with my parents, she used to stay with us whenever she visited Darjeeling. However I met her at Darjeeling only two times—in 1909 and 1911. In 1909, when I returned from abroad after becoming a barrister, I was staying at Calcutta during that time. I went to Darjeeling to meet everybody. There I met Sister. She was overjoyed to see me. She requested me whether I can take her to a visit to different villages in the hills. Once I agreed, she was very happy. 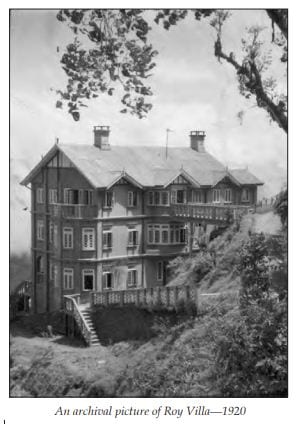 One day in the morning I took Bahadur with me to show her the villages since Bahadur knew the topography of those villages well. He himself hailed from there. While going there, she asked me about minute details regarding the villagers—how do they survive? Whether they are exposed to study of any kind? Whether the girls work harder than their male counterpart? Whom do they worship? What do they like to eat? What about their festivals? Questions like these. We went to visit a few villages during our day long tour. The villagers mostly were either Nepalis, Bhutias or belonging to other mountain tribes. Despite their difference, all of them were courageous, laborious and above all religious. In one such village we encountered a Lama priest to whom Sister asked some questions. I worked as a translator. Sister walked around one such Buddhist Stupa to sit in meditation. She even enquired whether some of the village girls are interested in study of any sort. How are they married? What are their customs? I translated those queries for her. Sister was so happy that day! Then I realized how much Sister loved this country! 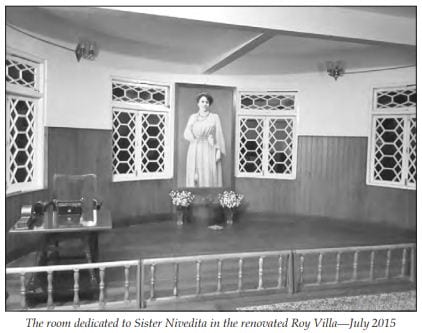 In 1911, I went to revisit Darjeeling with my family. There I got the information that Sister was at Darjeeling staying with Bose’s at ‘Roy Villa’. She was quite ill. However even in that situation she enquired about everybody. Acharya [Jagdish Chandra] Basu wanted to call doctor Nilratan Sarkar for the better treatment of Sister. I knew where Dr. Sarkar [was] put up at Darjeeling. I took him to ‘Roy Villa’ so that he can properly diagnose the ailment of Sister. He tried his best. Acharya Basu’s wife attended to Sister like a mother. During that time, I was a regular visitor to ‘Roy Villa’. However all our efforts failed; Sister left us all to take refuge under the feet of Sri Ramakrishna.

When Sister was severely ill, my Mother went to visit her. In fact, my mother has a circle of friends who were foreign ladies who in turn got acquainted with Sister and provided companionship during her illness. At the Chalk Bazaar area of Darjeeling, a lot of people from Kolkata used to live. During the summer and puja holidays, Darjeeling was a nerve centre of activity. Most of these visitors used to congregate at Chandmari hall. This hall was formed by my father, Mahendranath Bandopadhyay. At this hall, Swamiji even delivered a lecture. Sister also used to address audiences at this hall. Swadeshi leaders like Rashbehari Ghosh, P.Mitra, Anandamohan Basu, Ramananda Chattopadhyay, Brahmabandhab Upadhyay, Aswini Kumar Dutta, Jyotindra Mukherjee and even Gokhale used to visit the hall when they came to Darjeeling.

Sister used to love Darjeeling just like Swamiji. I took part in the procession that accompanied the remains of Sister after her demise at Darjeeling. Her last rites were performed according to Hindu rituals. Gangajal and new clothes which were used to purify the dead was dispatched by my mother. I remember the way my eyes got filled with tears-—sleep Sister, sleep peacefully in the land of cold comfort. Accept my earnest Pranam which you never accepted physically! Long live Sister! Long live Swamiji! Long live Sri Ramakrishna!!

About the Author: Shailendra Nath Bandopadhyay