Swami Vivekananda and Others on Religious Pluralism – Part 2

Home/Public Articles, Vedanta Kesari/Swami Vivekananda and Others on Religious Pluralism – Part 2
Previous Next

Swami Vivekananda and Others on Religious Pluralism – Part 2

(Continued from the previous issue. . .)

The same truth has manifested itself in different forms, and the forms are according to the different circumstances of the physical or mental nature of the different nations. . . I make the distinction between religion and creed. Religion is the acceptance of all existing creeds, seeing in them the same striving towards the same destination. Creed is something antagonistic and combative. There are different creeds, because there are different people, and the creed is adapted to the commonwealth where it furnishes what people want. As the world is made up of infinite variety of persons of different natures, intellectually, spiritually, and materially, so these people take to themselves that form of belief in the existence of a great and good moral law, which is best fitted for them. Religion recognizes and is glad of the existence of all these forms because of the beautiful underlying principle. . . 10 Do not think that people do not like religion. I do not believe that. The preachers cannot give them what they need. The same man that may have been branded as an atheist, as a materialist, or what not, may meet a man who gives him the truth needed by him, and he may turn out the most spiritual man in the community.11

Swami Prabhavananda (1893-1976), a disciple of Swami Brahmananda, taught that if a spiritual devotee practices any religion with sincerity and regularity, the Lord will lead that individual along the correct path. Avatars and prophets come in every age, but their message changes according to the signs of the times. God reveals Himself to the sages of the various religions, but His disclosure is limited and partial. Revelation is relative to the historical time and location, varying with each nationality, culture, individual temperament and level of consciousness. One religious teaching may supplement and not contradict another, since the total truth is not explained by a single theory, but is a synthesis of many theories. Spirituality is the unfolding of the divinity already within the soul, regardless of the individual’s religious preference.12

A Jewish Neo-Platonic thinker from Yemen, Nethanel al-Fayyumi (d.c. 1165) taught that God sends prophets to every nation, to people who are capable of receiving the revelation. Each nation receives from its prophets the appropriate revelation in the language that it speaks, which specifies the means for attaining the supreme goal. Revelations differ as a consequence of the particular characteristics of each nation. God is the good doctor, who varies His prescriptions according to the nature of His patients.13 Following his idea, each major religion is a revelation of God meant primarily for a portion of humanity.

The German Cardinal Nicholas of Cusa (1400-64) explained that, God is responsible for the differing forms of sacred worship. Religious diversity exists because the Lord dispatched different prophets and lawgivers to the various countries, each revealing the divine law. All religions are grounded in a common faith and a core of beliefs, creating a unique harmony and unity of religions. All pious worship is directed to the one God. By obeying their own religion, they are obedient to God.

Also important is that cultures change over time.

John Hick (1922-2012) an English Presbyterian Minister who taught at Claremont Graduate School in California, proposed a ‘Copernican revolution in theology.’ He said,

[It] involves an equally radical transformation in our conception of the universe of faiths and the place of our religions within it … [It demands] a paradigm shift from a Christianity-centered or Jesus-centered to a God-centered model of the universe of faiths. One then sees the great world religions as different human responses to the one divine Reality, embodying different perceptions which have been formed in different historical and cultural circumstances.14

Each religion is a reflection of the divine, though some are more capable of mediating God to humanity than others. One heavenly Reality pervades all religions, which share the common goal of salvation. In Its infinite depths, the Godhead is beyond human experience. Each religion experiences different aspects of the one supersensuous Noumenon. If properly understood, the apparent contradictions between the theologies of the differences religions, is more often complementary than contradictory.15 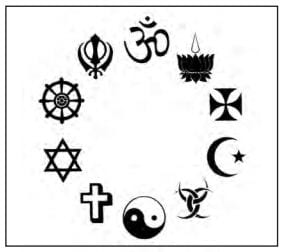 Each great soul who established a new world religion like Buddhism, Christianity, or Islam created to some extent a new path to God. The Lord’s love extends to people of all faiths, and through His knowledge He has created a variety of paths depending on the general nature and beliefs of the members of a particular religious group.

The Common Core of Religious Beliefs

The world would be a much poorer thing if one creed absorbed the rest. God wills a rich harmony and not a colorless uniformity. . . The God of love is not partial to only a fraction of humanity, but embraces all the major faiths of the world. Diversities of religions occur not in their inner core, but at the external level in the form of varying dogmas and ceremonies. Using different symbols and words, the same truths are presented by the various faiths. Not dogmas, but God realization and mystical union with the Supreme, are the essence of every religion. Mystically oriented traditions are more tolerant than those that are centered around intellectual beliefs. There is universality in the mystical experience that transcends theological differences.17

There is no religious concept, no dogmatic teaching, no ethical demand, no churchly institution, no cultic form and practice of piety in Christianity which does not have diverse parallels in the non-Christian religions.18

The world’s leading religions agree on far more things than most people realize. If similar ideas were discovered by people of different religions in different parts of the world this offers further verification for their correctness. If on the other hand religions continually disagree with one another, this will cause more people to become atheists and agnostics.

Christian theology tells us that certain doctrines belong, without doubt, to the supernatural order, since the limited powers of man’s finite faculties could not have conceived them. The fact that God is one and three (Trinity), that He can identify and unite with human nature (Incarnation), and that he gratuitously communicates Himself with the creatures (Grace) and makes Himself eternal present (Beatific Vision) are all examples of doctrines known to the Church through supernatural revelation.

These and other Church doctrines are found in other religions of the world, which ‘proves supernatural revelation outside the Judeo-Christian tradition.’ Jose Pereira added,

Non-Christian faiths are impregnated with truths which Christians hold to be supernatural … [this] leaves us with no alternative but to posit a universal revelation.

The salvation of Europe depends on a rationalistic religion, and Advaita—the nonduality, the Oneness, the idea of the Impersonal God—is the only religion that can have any hold on any intellectual people. It comes whenever religion seems to disappear and irreligion seems to prevail, and that is why it has taken ground in Europe and America.19

There is a twofold mode of truth in what we profess about God. Some truths about God exceed all the ability of human reason. Such is the truth that God is triune. But there are some truths which the natural reason also is able to reach. Such are the truth that God exists, that he is one, and the like. In fact, such truths about God have been proved demonstratively by the philosophers, guided by the light of natural reason.20

All the inhabitants of the earth are invited to partake of blessedness, and the means thereto are as extensive as the human race itself.

As a representative of the historical period known as the Enlightenment, he advocated universal religious beliefs and a system of morality grounded in the autonomy of reason. The eternal truths of the religion of reason apply to all humanity transcending the parameters of any particular faith. Mendelssohn pointed out that European scholars did not understand the religion of India, because they misinterpreted the meaning of their religious symbols.

Human reason and a common human nature are universal factors that bring about some commonality in religious beliefs, practices, and morality. Without these universal characteristic religions would differ far more than they presently do. Natural theology (or natural reason) is a method of inquiry into religious matters without referring or appealing to any sacred religious texts or divine revelation. Solutions to the problems of religious beliefs, practices, and morality are arrived at through the use of reason, empirical data, scientific findings, and historical research. These truths of natural reason fall within the capacity of the human intellect to discover, verify, and organize new religious ideas.21

In the past, rishis, teachers, and avatars had taught people how to reach the goal by following a particular path, none of them had ever preached the message that one could reach the same goal through all the different spiritual paths.’ Through these various mystical experiences, he [Sri Ramakrishna] realized the profound truth of each religion, proving that the same goal could be reached following many spiritual paths.22

Sri Ramakrishna explained that the Lord of the universe has created different forms of worship, to suit a wide variety of people. God is one but is worshiped under different names and forms. He ‘assumes different forms and reveals Himself in different ways for the sake of His devotees.’23

The same God is worshiped in different countries and ages under different names and forms. He may be worshiped in various ways according to different conceptions—some loving to call Him as father and others as mother, some as friend and others as beloved, some again as their sweet little child—but it is always one and the same God that is worshiped in all these diverse relations. . . Many are the names of God and infinite forms through which He may be approached. In whatever name and form you worship Him, through that you will realize Him. Different creeds are but different paths to reach the one God . . . The religious teachers of all lands and of all ages are but so many lamps through which the light of the Spirit streams constantly from the one almighty source.24

There is a commonality of spiritual experiences found in all major religions that transcends theological differences. S. Radhakrishnan indicated,

The mystics of the world, whether Hindu, Christian or Muslim, belong to the same brotherhood and have striking family likeness.

Though mystical theologies of the East and West differ widely . . . Yet in the experience of the saints this conflict is seen to be transcended. When the love of God is reached, divergences become impossible, for the soul has passed beyond the sphere of the manifold and is immersed in the one reality.25

God will manifest Himself to His devotee in the form of His belief. But you do not confine Him to any particular form; He is above limitations; so you must become a believer in all forms of beliefs. ‘Wherever thou turnest thy face, there is the face of the Lord.’

We could safely conclude that mystical religious experiences are universally valid and transcends theological dogma. And it is in this experience that the core of religious pluralism finds its true basis.

About the Author: Gopal Stavig