Swami Vivekananda’s Ideas and the Politics of Our Times

In a letter to his disciple Alasinga Perumal in 1894 Swami Vivekananda wrote:

I am no politician or political agitator. I care only for the Spirit—when that is right everything will be righted by itself . . . So you must warn the Calcutta people that no political significance be ever attached falsely to any of my writings or sayings.1

While Swamiji wanted to maintain a careful distance from politics, he influenced the contemporary political scene in more than one way. Scholars like Benoy Kumar Sarkar (1936), Bhupendranath Datta (1954), Amales Tripathi (1968), Dennis Dalton (1986) and many others have claimed that Vivekananda had exerted considerable influence on many important political thinkers and leaders in pre-Independence India.2 Jawaharlal Nehru in a speech in 1949 had remarked:

He [Vivekananda] was no politician in the ordinary sense of the word, and yet he was, I think, one of the great founders—if you like, you may use any other word—of the national modern movement of India, and a greater number of people who took more or less an active part in that movement at a later date drew their inspiration from Swami Vivekananda.3

Even in the recent past, political leaders from across the ideological spectrum in India have actively participated in celebrating the sesquicentennial birth anniversary of Swami Vivekananda (1863-2013).

If there was no ‘political significance’ of his words, then how could they inspire the political thinkers and activists in India across generations? Rather, we would like to argue that the nature and extent of the political significance of Swami Vivekananda’s ideas is shifting over time. To the ‘degenerated’ people of colonial India, Swamiji’s ideas were the source of power, motivation and courage to fight for freedom. To the enthusiastic citizens of a young Indian state, his ideas provided vital guidelines for the urgent task of nationbuilding. And now, for the ‘netizens’ of a globalised society Vivekananda’s ideas seem to have many new implications.

To understand the inherent dynamism of his ideas, we may refer to five important aspects of them with profound significance to the politics of our times. These are: the politics of conscience, commitment, harmony, people’s power and comprehensive development. Let us put these ideas in today’s context by elaborating them further.

Swami Vivekananda did not endorse any political interpretation of his ideas. He knew that if he had openly made any political remarks it would have made him an easy prey to the vested political interests. Besides, he could not associate himself with any of his contemporary social and political movements. In his assessment, they were mere imitations of foreign ideas having no concern for and connection with the vast majority of the Indian masses. But most importantly, his idea of politics was altogether different. For him, politics was not just about grabbing the state power and retaining it by any means. On the contrary, he considered politics as a conscientious endeavour for social change to secure justice and freedom for all, particularly for the most marginalised ones. And, a necessary precondition for doing such politics was renunciation of one’s self-interest for the interest of many. In that sense it was a moral, and ultimately, a spiritual enterprise. He believed:

. . . the basis of all systems, social or political. . . rests upon the goodness of men. No nation is great or good because Parliament enacts this or that, but because its men are great and good. . . Religion goes to the root of the matter. If it is right, all is right.4

Thus, Swamiji did not prescribe any preferred political arrangement. Instead, he sought to focus on preparing men and women who would be able to build up a system that they considered best for them. Emphasising this, he wrote:

Does man make laws, or do laws make man? Does man make money, or does money make man? . . . Be a man first, my friend, and you will see how all those things and the rest will follow of themselves after you. Give up that hateful malice, that dog-like bickering and barking at one another, and take your stand on good purpose, right means, righteous courage, and be brave.5

And for that, he felt it was necessary, particularly in India, to imbibe religious ideals. But he needed to redefine religion altogether to meet his purpose and convey his message. He considered that religion should be made socially relevant; otherwise it would remain confined only to the ‘books and dogmas’.6 Thus, he wrote:

Swamiji sought to define politics in terms of this ‘new’ idea of religion and expected all efforts for sociopolitical transformation in India be guided by these, effectively, moral and spiritual principles.

Unfortunately, politics in India today has become almost synonymous with corruption and crimes. According to a report by the Association for Democratic Reforms (ADR), at present 82% of our Members of Parliament (MPs) have criminal cases against them, 32% of them are booked under serious criminal offences, and 21% of them are ‘crorepatis’.8 According to the ‘Corruption Perceptions Index (CPI) Report 2013’ published by the Transparency International, India is ranked 94 out of 177 countries under survey with a CPI score of 36. India is ranked alongside Algeria, Armenia, Benin, Colombia, Djibouti, Philippines and Suriname; whereas Brazil (72), South Africa (72), China (80) and Sri Lanka (91) are placed at higher ranks.9 But Swamiji’s ideas call for a rejection of such narrow perspectives of politics and replacing it with a politics of conscience. This is the kind of politics which motivates one to place the interests of his nation or the humanity as a whole, before his own self-interests or the parochial interests of his family, community or party.

Though themselves the reservoir of all powers, the subject masses, creating an eternal distance between one another, have been deprived of all their legitimate rights; and they will remain so as long as this sort of relation continues.10

One remedy, according to him was making the masses aware of their shared interests. As he argued: ‘A common danger, or sometimes a common cause of hatred or love, is the bond that binds people together.’11

He felt that the people should be motivated to believe that ‘In the interest of one’s own nation is one’s own interest; in the well-being of one’s own nation is one’s own well-being.’12 and join ‘friendly hands in mutual help.’13 That was why Swamiji repeatedly urged his followers to organise themselves for rendering selfless service to the marginalised people. In a lecture delivered in Madras in 1897, he passionately appealed to youth to engage themselves in the service of their poor countrymen. He said:

Instead of spending your energies in frothy talk, have you found any way out, any practical solution, some help instead of condemnation, some sweet words to soothe their miseries, to bring them out of this living death?14 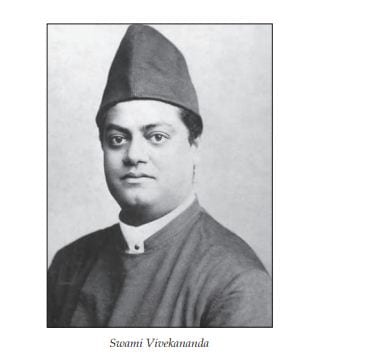 In 1897, Swamiji founded the Ramakrishna Mission in Calcutta, to lay down a model about how to realise his idea of Seva or the service of God in man. The Mission is now one of the oldest active indigenous voluntary social service organisations in India. In an effort to blend spirituality with selfless social service Vivekananda proclaimed the motto of the organisation as ‘For one’s own salvation, and for the welfare of the world.’15 The ‘Methods of Action’ of the Mission included: ‘(a) To train men so as to make them competent to teach such knowledge or sciences as are conducive to the material and spiritual welfare of the masses; (b) to promote and encourage arts and industries.’16

Addressing the members of the newly formed Ramakrishna Mission and some of his young followers through many of his lectures, letters and informal conversations Vivekananda had left an array of instructions and detailed guidelines covering some of the most crucial aspects of conducting organised efforts for social change. He stressed on having a positive outlook and the need to get actual work done rather than engaging in aimless arguments over policy matters.

He left guidelines on many important aspects of organisational affairs, such as the question of leadership, the attitudes, motivation and exposure of the workers, effective division of labour, issues related to accountability and transparency, methods of resource mobilisation, democratisation of the decision-making process, and many related subjects. Vivekananda’s idea of intervention for social change was also ahead of his times. Instead of merely doling out to the poor, he was in favour enabling people to claim their rightful positions in society. In his words:

My whole ambition in life is to set in motion a machinery which will bring noble ideas to the door of everybody, and then let men and women settle their own fate. Let them know what our forefathers as well as other nations have thought on the most momentous questions of life. Let them see especially what others are doing now, and then decide. We are to put the chemicals together, the crystallisation will be done by nature according to her laws.17

In this age of Liberalisation-PrivatisationGlobalisation (LPG), the role of the welfare state seems to be shrinking. It may not make any difference to the lives of the rich and aristocrats, but it has profound implications to the lives of the millions of marginalised people in society, particularly in the developing nations. Here, the role of voluntary nongovernmental organisations in reaching out the unreachable has become increasingly significant. According to a government sponsored survey published in March 2012 there were 6.94 lakh Non-profit Institutions (NPI) across India and 48.2 per cent of them were registered in 2001 or after, i.e., after the introduction neo-liberal policies in India.18

The Government of India in its first ever ‘National Policy on the Voluntary Sector – 2007’ acknowledged the significance of the voluntary sector in facilitating development.19 At the same time, the report observes that efforts must be made ‘to bolster public confidence in the voluntary sector,’ particularly with regard to its ‘governance, accountability, and transparency.’20 In this context, Swamiji’s idea of committed voluntary action for social change seems to be quite significant in conducting today’s organised voluntary initiatives in a more meaningful and effective manner. (To be continued. . .)

The seed is put in the ground, and earth and air and water are placed around it. Does the seed become the earth, or the air, or the water? No. It becomes a plant, it develops after the law of its own growth, assimilates the air, the earth, and the water, converts them into plant substance, and grows into a plant. Similar is the case with religion. The Christian is not to become a Hindu or a Buddhist, nor a Hindu or a Buddhist to become a Christian. But each must assimilate the spirit of the others and yet preserve his individuality and grow according to his own law of growth.

About the Author: Sandipan Sen