How Swamiji inspired JRD Tata to start IISc in Bangalore

How Swamiji inspired JRD Tata to start IISc in Bangalore

In 1893, in a boat that sailed from Yokohama to Vancouver, two great Indians, one, a monk and the other, an industrialist met for the first time. The monk was Swami Vivekananda, who was to take and interpret to the West, more effectively than anyone else, the religious and philosophical tradition of India. The industrialist was Jamshedji Tata, the father of Indian industry. As they got talking, Vivekananda explained his mission of preaching in the US, the universality of all religions. Jamshedji said he was in search of equipment and technology that would build the steel industry and make India a strong industrial nation. Vivekananda blessed Jamshedji, and remarked …….. “How wonderful it would be if we could combine the scientific and technological achievements of the West with the asceticism and humanism of India!”

They never met after that journey. But these words struck a chord in Jamshedji’s heart. Five years later, Jamshedji’s response came in a letter to Vivekananda.

I trust, you remember me as a fellow- traveller on your voyage from Japan to Chicago. I very much recall at this moment your views on the growth of the ascetic spirit in India, and the duty, not of destroying, but of diverting it into useful channels.
I recall these ideas in connection with my scheme of Research Institute of Science for India, of which you have doubtless heard or read. It seems to me that no better use can be made of the ascetic spirit than the establishment of monasteries or residential halls for men dominated by this spirit, where they should live with ordinary decency and devote their lives to the cultivation of sciences –natural and humanistic. I am of opinion that ,if such a crusade in favour of an asceticism of this kind were undertaken by a competent leader, it would greatly help asceticism, science, and the good name of our common country; and I know not who would make a more fitting general of such a campaign than Vivekananda. Do you think you would care to apply yourself to the mission of galvanizing into life our ancient traditions in this respect ? Perhaps, you had better begin with a fiery pamphlet rousing our people in this matter. I would cheerfully defray all the expenses of publication.

With kind regards, I am, dear Swami 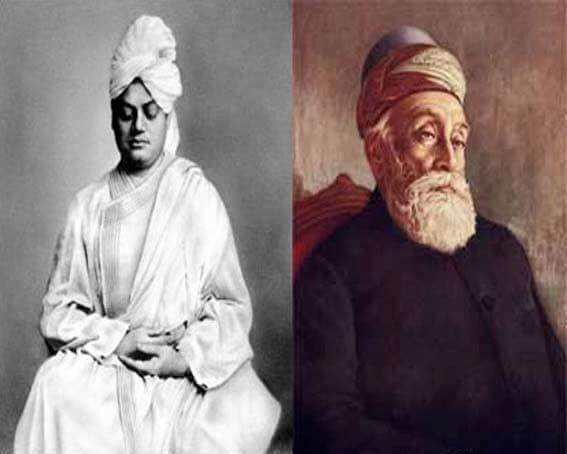 Vivekananda was busy starting the Ramakrishna Mission and could not accept the offer but he promptly sent Sister Nivedita who met Jamshedji and his advisor, Mr Padsa. A detailed plan formulated by them was promptly suppressed by the Viceroy, Lord Curzon. However Tatas persevered and continued to work on their plans.

On July 1902 Swamiji gone , Jamshedji did not live long either. In 1904, he died unaware that his vision would be realised five years later. The Indian Institute of Science, a gift from the Tatas to the Nation, was born in 1909 & started functioning in Bangalore in 1911. 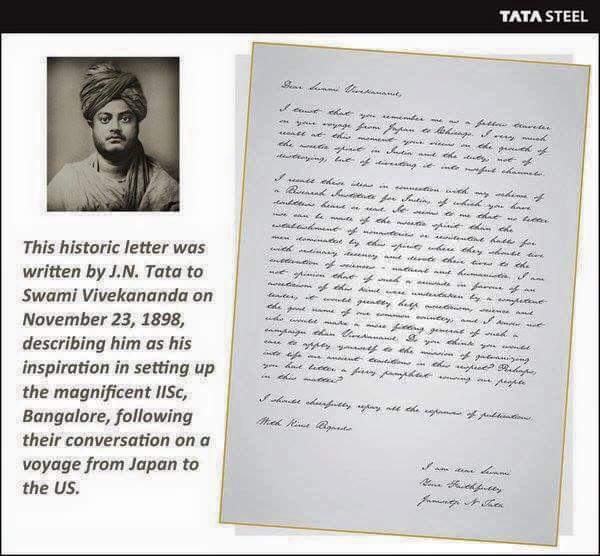