The Ramakrishna Sarada Mission has been educating tribal girls in Arunachal Pradesh for the last 37 years, ever since 1973 with its school in Khonsa, a remote corner of the district of Tirap. The Khonsa school is now a premier quality educational institution, highly prized by the State. It is especially rewarding that so many tribal girls educated in the school have become well established in different abilities, an asset to their communities capable of solving social problems, and eager to serve their Motherland.

The success of the Khonsa school prompted requests from all over Arunachal Pradesh for the Ramakrishna Sarada Mission to develop similar schools in their other districts.

In 2007, the Ramakrishna Sarada Mission finally accepted the earnest invitation of the people of Dirang and their local MLAs and Ministers, to run a school in their district. There are nearly 420 villages in West Kameng and Tawang, mainly inhabited by the Monpa tribe of Arunachal Pradesh. As this locality is a border state with a low female rate, creating awareness of the need for women’s education will have a large social impact.

The Monpa tribal children, and especially the girls, will not only improve their own living conditions but will raise future generations with the values and motivation to put a proud smile on the face of our nation. India’s patriotic prophet Swami Vivekananda laid great emphasis on the education of women as a key factor in uplifting the masses and building a new India.

The new Dirang project was launched in February 2008 by the Chief Minister himself in the presence of the leading Monpas of the district. Ten acres of land were donated on the bank of the Kyamani River about 15 km from the Dirang Township.

Three years down the line a few buildings have come up, though much more needs to be done. The dedicated efforts of a few sincere people have made the construction a reality so far in the face of innumerable hurdles. Without their help this project would still be a dream. DoNER of the Central Ministry has provided funds for the construction of the school, the hostel, and several other buildings. The infrastructure is well underway, and requests are already being received for the Ramakrishna Sarada Mission to open the school this year.

Arunachal Pradesh, although famous for its scenic beauty, is still not a well- developed State and it lacks a stable economy. It will not be possible to sustain this project with State funds alone. This challenging project in the far Northeast, whichshares its borders with China and Bhutan, has fostered an overwhelming response from the general public all over India. What is needed now is the active cooperation
and collaboration from interested organizations throughout our country.

Ramakrishna Sarada Mission centre at Dirang was officially inaugurated by Most Revered Pravrajika Amalaprana Mataji, General Secretary, Sri Sarada Math & Ramakrishna Sarada Mission on the auspicious day of Buddha Purnima on 17th May 2011; school was started with 49 residential students from Arunachal Pradesh in general and from West Kameng and Tawang Districts in particular.

In each successive year a new class is added to accommodate the current batch of students and currently the student strength stands at 236 (2016-2017). Over the last 6 years the school has created a rigorous internal assessment system to evaluate the performance of students, including “Formative and Summative Tests”. The school lays great emphasis on developing the overall personality of the child, keeping the traditional customs as it is. To achieve this goal, several competitions and events including Recitation, Drawing, Extempore, Story Writing, Story Telling, Quiz, Science Day, Sports Day, Arunachal Day and National Youth Day are organized with much zeal. Many of these competitions are conducted by external organizations and Ramakrishna Sarada Mission Girls’ School has won the top prizes in most of these competitions. The students of the school have a special talent for painting and have participated in several competitions, including State Level. 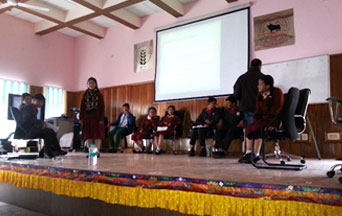 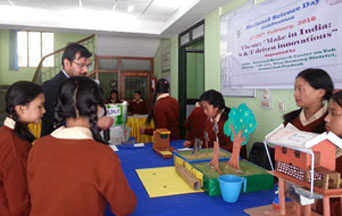 Regular extra-curricular activities, forming a part of their overall assessment include, Yoga, Drawing/Painting and Vocational Training. Vocational training includes embroidery, stitching and weaving which is separately taught, with a view to specifically promote the culture of the region.

The students of the school have a special talent for painting and have participated in several competitions, including State Level.

The school also runs the “Know Your Country” project, in which students and escorts from Kolkata visit the school. This project aims at increasing interaction amongst students from various regions and promoting exposure and awareness about our country & culture.

Apart from providing exposure to students to other regions in the country, the goal is to create a unified school, bringing together students from different regions in Arunachal Pradesh under one roof, to intermingle and learn from diversity.

How to integrate the students from the North-East with those from other regions of the country is one of the paramount goals of the institution. With this in mind, we are focused on creating an institution that provides the best-in-class facilities and resources to the students.

Building a culture of Discipline and Service

Building self-discipline and an attitude of service is strongly encouraged in the student through a process of allotting hostel and school routine duties for all students. Personal responsibility is expected for daily conduct and for the maintenance of harmony of the institution through a process of Continuous Assessment which evaluates students on discipline, behaviour and willingness to take up responsibilities in the betterment of their school. 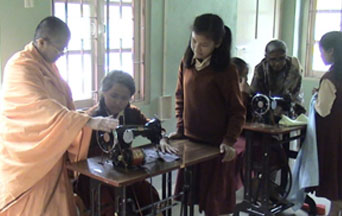 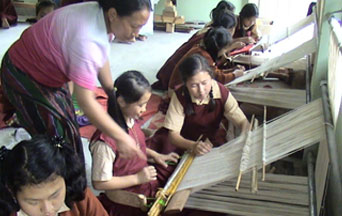 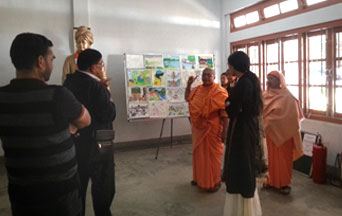 The Deputy Commissioner for West Kameng being shown students’ artwork

Apart from regular subjects, the children learn Art, Yoga, play a variety of Games and borrow books over the weekend from the School Library. Occasional trips outside the school are undertaken to explore the vast expanse of natural beauty, which surrounds the school.

The students are exposed to the richness of Ancient Indian History and Culture through the medium of audio-visual. Documentaries on India ranging from Partition of India, Bharat Ek Khoj Series, Upanishad Ganga Series, Discovery and National Geographic channel Series, Ramayana, Mahabharata and children’s movies are shown to the children regularly to expose them to the glory of our country. Weekends are often spent in gardening, cleaning the Mission Campus, playing indoor games in the Hostel courtyard or relaxing with a library book. On Saturdays, either a book reading or an informal chat with the children is conducted to share anecdotes and inspiring stories from the lives of Great Personalities and to allow the children an opportunity to interact closely with the staff.

As part of the yearly functions – children write scripts for dramas and stage the dramas with a variety of themes, the favourite themes being the Epics, Lives of Freedom Fighters such as Bhagat Singh and incidents from the lives of the Holy Trio – Sri Ramakrishna, Sri Sarada Devi and Swami Vivekananda. Local Traditional Tribal Dances including Bamboo dance are often staged at these functions with the children dressing up in their traditional attire and displaying the uniqueness of their state using various materials. On this special occasion senior children prepare local dishes.